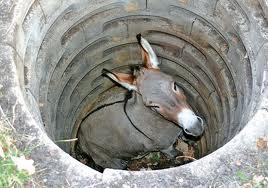 At the beginning of a lecture on the effects of stress, I told this story to my class:

One day a farmer’s donkey fell down into a well. The animal cried piteously for hours as the farmer tried to figure out what to do. Finally, he decided the animal was old, and the well needed to be covered up anyway; it just wasn’t worth it to retrieve the donkey.

He invited all his neighbors to come over and help him. They all grabbed a shovel and began to shovel dirt into the well. At first, the donkey realized what was happening and cried horribly. Then, to everyone’s amazement, he quieted down.

A few shovel loads later, the farmer finally looked down the well. He was astonished at what he saw. With each shovel of dirt that hit his back, the donkey was doing something amazing. He would shake it off and take a step up.

As the farmer’s neighbors continued to shovel dirt on top of the animal, he would shake it off and take a step up. Pretty soon, everyone was amazed as the donkey stepped up over the edge of the well and happily trotted off!

One student raised his hand and said, “That was great story professor, but being a student in college today has its own set of stressors.”

Ahh, the perfect opportunity for a discussion that relates to the topic and has meaning to the class. Dare I take the challenge and meet this potentially hot topic head on?

OK, I’ll bite, I asked the student if he would share with us the stressors he was referring to.

“Well to start, feeling intense pressure to obtain high grades, especially if you’re in a program  that may connect with career opportunities,  taking final exams,  trying to establish some kind of social life and  dealing with the costs of college.”

More hands rose to the occasion,  single parents balancing work, school, and family, how layoffs forced career changes and with those changes meant going back to school, and what about after  graduation, will I be able to find a job in my field of interest?, and don’t even start me on the topic of student loans.  The class was beginning to sound more like an AA meeting, with individuals sharing their fears and concerns about the stressors of being a student.

It was stress in action and needless to say the discussion became how these stressors affected the students personally.

Following up on our discussion in class, I came up with some interesting facts about stress and college students.

We live in interesting times, the rapid acceleration of technology and social change. The emergence of the internet, smartphones, Facebook, Twitter and other social media technologies have fundamentally altered the social fabric and the ways we relate. Our students live in a hyper-connected world which gives them even more access to an endless array of choices and information that can be overwhelming and confusing. Psychological research on choices shows that in many cases, more choices lead to more anxiety. In addition, we now have endless access to information that might be psychologically disturbing, via constant news of troubling stories.

Yes, college can be extremely stressful. It is, in many ways, a rite of passage, but with that comes much adjustment difficulty.

This student’s response given in a Blackboard assignment seemed to really encompass the fears and the concerns that many of our students have.

“There is an enormous pressure to know what you are going to do with the rest of your life when you leave school.  People say that it is okay to not know what you want to do, but there is this unspoken expectation. You are expected to have university lined up, or an internship, or a job. I just can’t imagine what I want to do with the rest of my life. That in itself makes me feel unsure and helpless.”

1 thought on “The Donkey in the Well”